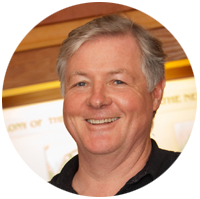 In 1981, Dan Barwick, a native of England, took his first wine job in the wine department of Harrods in London. “That’s where a wine germ settled and stayed in my head until I was ready to discover more,” says Barwick. After a short stint in wholesale wine sales, Barwick hopscotched around the wine world for nine years, first a Matanzas Creek Winery in Sonoma’s Bennett Valley, then Ferrai-Carano, over a Burgundy and then Stellenbosch and the Barossa Valley, before coming back to Sonoma County and Martin Ray Winery, and finally Paradise Ridge where he started working with Trecini.

Since 1999, Dan has made 17 consecutive vintages of Trecini. John Vicini and Dan have worked together to bring the subtle yet flavorful nuances found in European wines with lower alcohol and full flavors with minimal manipulation. Trecini is known for their award-winning wines and the variety consistency from year to year.